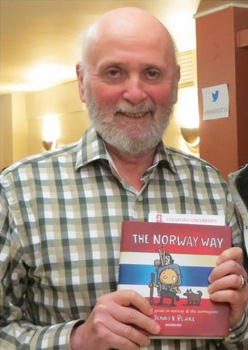 Jerry is the co-founder and secretary/treasurer of the Evolution Institute. Prior to the establishment of EI as a non-profit in 2010, he served as president of the Humanists of Florida Association, which is affiliated with the American Humanist Association and was EI’s initial umbrella organization in 2008. Jerry presently serves on the boards of the Secular Student Alliance, Florida Consumer Action Network (FCAN) Foundation, and Project Now Inter-generational Outreach. The lattermost is a neighborhood-based organization in East Tampa, FL with one of the state’s lowest income populations. EI collaborates closely with Project Now – providing technical assistance and organizational capacity building.

Jerry concluded his formal education in 1973 when he was awarded his PhD from New York University. Prior to his retirement in 2002, he was founder and director of the Florida Community Partnership Center at the University of South Florida in Tampa. The center harnesses the massive human and technical resources within a large, comprehensive state university to improve the quality of life in impoverished neighborhoods in the Tampa Bay region. Before his retirement, he successfully created an endowment for his center, and it is now named the Jim Walter Partnership Center – as a result of a large donation from a family well known for affordable housing development.

Before Jerry moved to Florida in 1989, he was a professor of political science in New Jersey for 25 years at Essex County College in Newark and at William Paterson University in Wayne. While at the former institution, he founded the Urban Institute and served as a dean. Governors of the state appointed him to serve on several boards that impacted NJ higher education as well as its electoral process.

His background also includes extensive political campaign experience in the Democratic Party and experience as a professional consultant (including for the Meadowland Chamber of Commerce) and as a principal in an investment bank and import export company. In addition to teaching, research, and deep community engagement, he has been active in fundraising for organizations and political candidates that share his progressive values.

EI has been engaged in learning as much as possible about Norway since its Quality of Life workshop at the University of Memphis in 2011. There we considered what nations…
Read More
October 1, 2021 in Community Development

In a previous post, we discussed the emerging collaboration the Evolution Institute has with Mondragon University. We explained how this was made possible by humans having a predisposition to be…
Read More
August 20, 2021 in Economy, Psychology

From infancy through adulthood, humans demonstrate a predisposition to be prosocial and develop an understanding that collaborative efforts deserve a fair distribution of rewards. This is attributed to the dynamic…
Read More