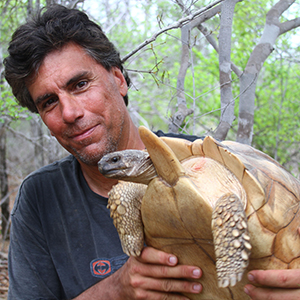 Dr. Craig Stanford is an expert on animal behavior and human origins. He is Professor of Biological Sciences and Anthropology at the University of Southern California and Director of the USC Jane Goodall Research Center.  Stanford holds a Ph.D. from U.C. Berkeley and was the long time chair of the USC Department of Anthropology.  He is best known for his research and his books on chimpanzee hunting and meat-eating in Gombe National Park, Tanzania, done in collaboration with Dr. Jane Goodall. In addition, he spent a decade studying the ecological relationship between chimpanzees and mountain gorillas in the Impenetrable Forest of Uganda.

He has conducted field research on primates and other animals for more than 20 years in Africa, Asia and Latin America.   Stanford is the author of 16 scientific and popular books and more than 130 scholarly articles on animal behavior and human evolution.  His most recent book, Planet Without Apes, is published by Harvard University Press, and describes the critical situation facing the apes in the 21st century.