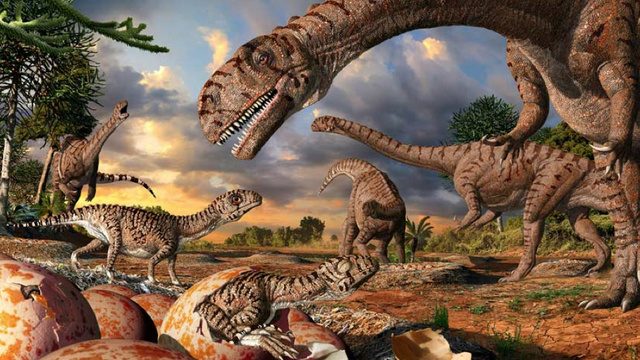 For animals that existed 200 million years ago, we know an awful lot about dinosaurs. However, a lack of fossil evidence has left paleontologists somewhat in the dark about how mother dinosaurs raised their young. Robert Reisz, from the University of Toronto Mississauga, Canada, is shedding light on this exciting new area of study. Reisz, a biology professor, is leading a study of the oldest dinosaur nest fossils found to date. These 190-million-year-old nests, found in South Africa’s Golden Gate Highlands National Park, trump the next-oldest nests by 100 million years. Ten nests have been uncovered, each with upwards of 30 eggs belonging to the herbivorous dino Massospondylus, a precursor to the well-known long-necked sauropod Brachiosaurus. Nearby were the bones of what scientists believe to be the mother dinosaurs. The adult females were likely 20 feet (6 meters) long, whereas their eggs were only 2.3-2.7 inches (6 to 7 centimeters) wide. Reisz and his colleagues think that, due to the number of nests found in the same layer of rock, several dinosaur families nested together. Some nests were also found in other layers, suggesting that multiple generations of Massospondylus repeatedly returned to the waterside nesting site. This ancient dino nursery will continue to provide paleontologists with new information as Reisz and others continue to analyze its remains.

Read the original article in the Proceedings of the National Academy of Sciences.

DINOSAURS, THE EVOLUTION OF BIRDS, AND THE ORIGIN OF FLIGHT: