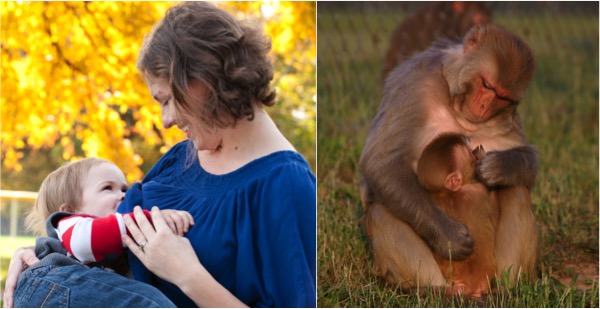 Why Gazing At Babies May Be So Irresistible

I did it with my daughter. I did it with my son (as depicted above). Mothers the world over do it. We gaze, almost reflexively, at our infants’ faces. And not just for brief moments, but for long, uninterrupted spells. It turns out, we’re not alone: nonhuman primate mothers gaze at their infants, too. Chimpanzees, geladas, and macaques have all been documented engaging these face-to-face interactions, and there are unpublished reports of other species (such as bonobos) engaging in them, too. Why does this behavior persist across primate taxa? (And why is it seemingly absent in other mammals?)

A unique study published today by our laboratory may begin to answer this question. In a combined observational and experimental study of rhesus monkeys, we explored how variations in early face-to-face interactions between mothers and infants influence infants’ later social development. In our observational study, we found that monkey infants whose mothers engaged in a particular type of face-to-face interaction – mutual gazing – more frequently with them in the first month of life, were more sociable later in infancy and into monkey toddlerhood: they spent more time in social contact with other monkeys, and they initiated more social interactions like grooming and play. These findings are important, as they are the first to demonstrate that variability in neonatal mother-infant interactions shape the later expression of social development.

At a proximate level, it’s possible that monkey moms who engage in mutual gazing with their infants are also in physical contact with them more frequently, and this physical contact is what drives the infants’ later sociality. At an ultimate level, it is possible that these two traits – mutual gazing and enhanced sociality – are pleiotropic, meaning they independently resulted from influences of the same gene.

Our experimental study addressed these hypotheses. In a group of infant monkeys reared in a nursery by human caregivers, without the typically-occurring interactions from their mothers (but, importantly, still given typical interactions with same-aged peers), we randomly assigned 1/3 of the infants to receive standard care, 1/3 to receive extra physical handling only, and 1/3 to receive extra handling and face-to-face interactions in the first month of life. Intriguingly, only the infants in the handling-plus-face-to-face group were more social later: at 2 months (monkey infancy), eyetracking assessments revealed that they looked longer at pictures of (unrelated and unknown) monkeys in a social setting as compared to abstract photos. The other groups showed no difference in looking times between the two stimuli. At this age, the handling-plus-face-to-face infants also spent more time in social interactions with their peers than infants in the other two groups – and the other two groups did not differ from each other. Thus, it appears that the experience of neonatal face-to-face interactions in particular is promoting the greater sociality we observed later in development. Importantly, these effects are not driven by increased physical contact.

Our findings suggest that neonatal face-to-face interactions such as mutual gazing exist in both human and nonhuman primates because they evolved in gregarious species exhibiting enhanced sociality. Of particular note is that all the primates – including humans – that have been documented engaging in mother-infant mutual gazing are highly social species that live in multi-male, multi-female groups. All of them use social tactics to secure resources required for survival and reproduction. As human and nonhuman primates alike rely on subtle and complex facial gestures for communication, it makes sense that we moms would begin to expose our infants to these intricate expressions from the get-go. Primates living in large, stable social groups rely on advanced social skills to both coordinate their behaviors with others in the group and to solve conflicts arising from resource competition. Thus, by imparting advanced social skills in infancy via face-to-face interactions, primate caregivers may be promoting social competence that is critical for survival in complex societies. 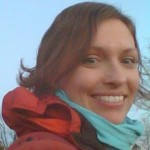 Dr. Amanda M. Dettmer is a primate neuroscientist who examines the early life organization of risk and resilience to health disparities across the life span, with a particular focus on stress sensitivity as a mediator. She studies rhesus macaque models of human development to answer questions from a translational perspective, and to understand human traits in an evolutionary context. Her research centers around three themes: 1) the roles of chronic hormones, maternal traits, and group dynamics on predictors of optimal and suboptimal infant and adolescent development; 2) the long-term hormonal and behavioral changes that occur in the transition to motherhood, as well as in the transition from primiparity (one infant) to multiparity (multiple infants); and 3) identification of genetic and physiological predictors of, and potential interventions for the treatment of, neuropathologies throughout the lifespan.