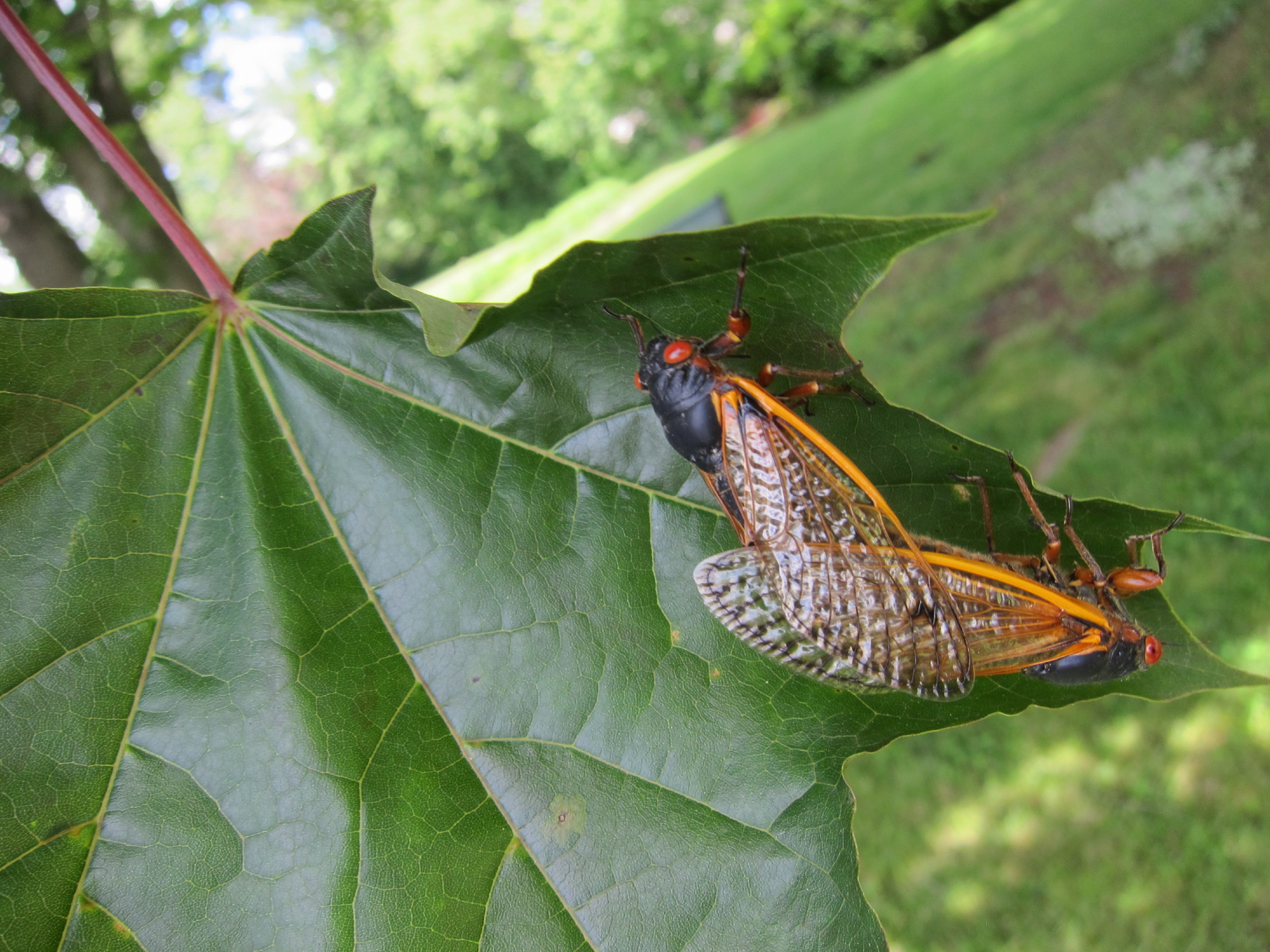 The Social Life of Periodical Cicadas

2013 is the Year of the Cicada – at least in my home state of Connecticut. Every 17 years certain parts of the state are overrun by millions of these remarkable insects. Their Latin name, Magicicada septendecim (the 17-year magical cicada) says it all.

Last time cicadas emerged (17 years ago) I was out of state and missed seeing this, one of the wonders of biological world. So when my colleagues Chris Simon and John Cooley invited everybody to a field trip last Sunday, I naturally jumped at the opportunity.

A one-hour drive to Meriden, CT, was definitely worth it. Cicadas were all over the place flying around, crawling on all kinds of surfaces, including us (every few minutes a cicada landed on me).

You can get a pretty good idea of what periodical cicada emergence looks like by watching this wonderful video by Samuel Orr.

One thing that you will not get from the video, however, is the very distinctive odor at the emergence site. I asked John what the smell was. I thought perhaps it was a pheromone, but it turns out it is simply the smell of thousands of dead cicadas decomposing (we were there just past the peak).

What I found particularly interesting about cicadas is that they are a social insect, even though their societies are extremely simple – they are certainly not ‘eusocial’ like ants and bees, or ‘ultrasocial’ like humans. The definition of ‘society’ that I favor is a group of individuals who together produce a public good. By this definition periodical cicadas are social (if just barely). The public good that cicadas produce is a reduction of predation risk that is achieved by collective efforts.

For 17 years periodical cicadas lead a solitary underground life, quietly sucking on plant roots. This is not a terribly nutritious food, so they require many years to get enough of it to grow to the last, pre-adult stage. Then they crawl out from the soil, climb up tree trunks, and anchor themselves on the bark. Their backs split up, and adult crawls out, often leaving the empty husk still clinging to the tree.

Other husks litter the soil around tree trunks:

Adult cicadas are slow and clumsy fliers and have no chance against any predators, such as birds and small mammals. Although other folks brought with them insect nets, you can easily catch them by hand. They are completely defenseless. The only reason that they all don’t get eaten is because there are so many of them. And that is where the production of the public good I was talking about earlier comes in.

The mathematics of using aggregation as an anti-predator strategy is very simple. Imagine that you are a cicada, and that you are about to emerge. There are a variety of birds, mice, and other predators in the area, who love yummy cicadas. They will eat as many as they can get, but eventually they gorge themselves so full that they have to stop eating. Let’s suppose that all these predators can collectively eat 1000 of cicadas like you. So if you come out as part of a small force, a few hundred, for example, pretty much all of you will be eaten. Only a very few lucky ones will survive. Your chances of being eaten are close to 100 percent. On the other hand, if there are 10,000 of you emerging en masse, then the predators will gorge themselves, killing the maximum they can, which is 1000. Your chance of being eaten is now only 10 percent. If there are 100,000 of you, your chances of being eaten are even less, just 1 percent. And so on.

My post-doctoral research was actually about this effect, swamping the predators by aggregating. You don’t need to become better at fighting predators off, or confusing them by running back and forth – all you need to do to reduce your risk of being eaten is to be part of as huge aggregation as possible. The late theoretical biologist Bill Hamilton (the one who discovered kin selection) also wrote an influential article on this effect, Geometry for the Selfish Herd.

Reduction of predation risk by aggregation is a public good, because nobody can be excluded from enjoying it. Just get yourself to the area where there are huge numbers of ‘people’ like you, and all enjoy reduced predation risk equally. More importantly, if you are a cicada, you want to make sure that you emerge in the right year. If you come out a year early, or a year late, your chances of surviving are pretty slim. Every now and then a few cicadas make this mistake, and they get slaughtered.

It is very important for periodical cicadas to cooperate in emerging all together, so that they can swamp the predators. However, this kind of cooperation is actually much easier to achieve than most cooperative tasks that humans accomplish (as I said, the social life of cicadas is rather rudimentary). In the case of ‘strong’ cooperation a group not only produces a public good, but its members incur costs, or risks, in the production of the good. For example, if the public good is collective defense against an invading army, all those who participate in it run the risk of being killed or maimed in the fighting. So the natural inclination is to defect, or free-ride – let others assume the risks, but enjoy the fruits of their cooperation (repulsion of the enemy). Humans have evolved all kinds of ways of solving this problem with free-riding.

For cicadas things are easier. You don’t gain by ‘defecting’ – emerging outside of the brood is a one-way ticket to a bird’s stomach. So it’s really a problem of coordination, not cooperation in the strong sense of the word. (Another example of a coordination problem is choosing on which side of the road to drive. Once everybody decides on the same side, it is to everyone’s advantage to keep the rule. If you ‘defect’ you get killed in a head-on collision.)

Cicadas, thus, need to ensure that they all emerge at once, in the same year. How did they decide on which year to emerge? Mathematical models show that no great powers of cogitation and persuasion are needed. It all can happen rather automatically. Suppose that you start with a bunch of ‘broods’ inhabiting the same locality, but emerging in different years. What will happen is that larger broods will have a better survival probability than smaller broods, because they will be able to swamp predators more effectively. The worst thing you can do is to emerge in the year after a large brood emergence. All those predators that gorged themselves last year made lots of baby predators, who are now running around hungry looking for something to eat. As a result of this very simple mechanism, large broods will become larger, and small broods will dwindle. Just as the rich get richer, while the poor get poorer. In the end there will be only one brood standing, emerging once every 17 years.

All photographs in this article ©Peter Turchin