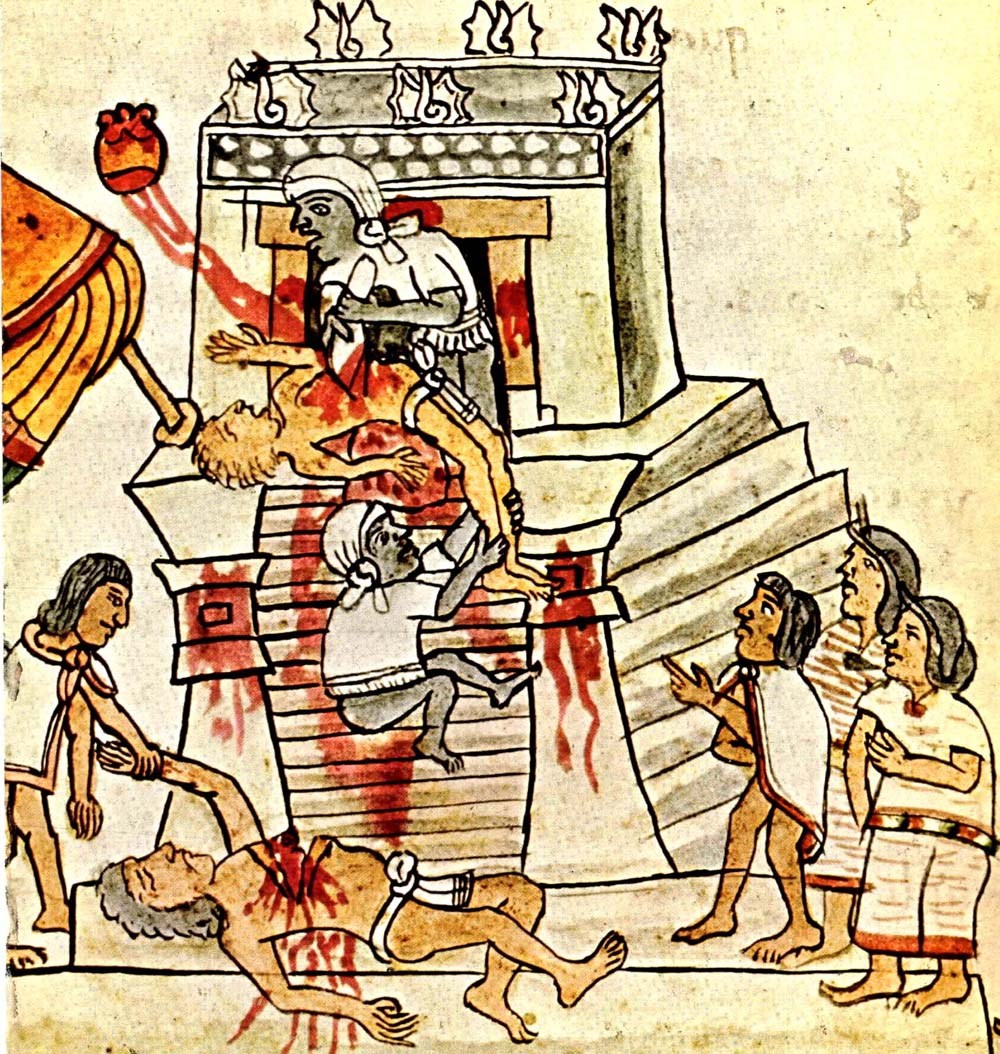 Is Human Sacrifice Functional at the Societal Level?

By Peter TurchinApril 13, 2016 3 Comments
Human sacrifice as shown in the Codex Magliabechiano, Foundation for the Advancement of Mesoamerican Studies, via Wikipedia.

An article published this week by Nature is generating a lot of press. Using a sample of 93 Austronesian cultures Watts et al. explore the possible relationship between human sacrifice (HS) and the evolution of hierarchical societies. Specifically, they test the “social control” hypothesis, according to which human sacrifice legitimizes, and thus stabilizes political authority in stratified class societies.

Their statistical analyses suggest that human sacrifice stabilizes mild (non-hereditary) forms of social stratification, and promotes a shift to strict (hereditary) forms of stratification. They conclude that “ritual killing helped humans transition from the small egalitarian groups of our ancestors to the large stratified societies we live in today.” In other words, while HS obviously creates winners (rulers and elites) and losers (sacrifice victims and, more generally, commoners), Watts et all argue that it is a functional feature—in the evolutionary sense of the word—at the level of whole societies, because it makes them more durable.

There are two problems with this conclusion. First, Watts et al. do not test their hypothesis against an explicit theoretical alternative (which I will provide in a moment). Second, and more important, their data span a very narrow range of societies, omitting the great majority of complex societies—indeed all truly large-scale societies. Let’s take these two points in order.

An alternative theory on the rise of human sacrifice and other extreme forms of structural inequality is explained in my recent book Ultrasociety. By “structural inequality” I mean more than just great differentials in income and wealth that characterize our modern, even democratic, large-scale societies. In addition to HS, these include ruler deification and more generally “despotism,” when there are no constraints on what rulers and elites can do to commoners; for example, kill them without any negative consequences for themselves.

Briefly, my argument in Ultrasociety is that large and complex human societies evolved under the selection pressures of war. To win in military competition societies had to become large (so that they could bring a lot of warriors to battle) and to be organized hierarchically (because chains of command help to win battles). Unfortunately, hierarchical organization gave too much power to military leaders and their warrior retinues, who abused it (“power corrupts”). The result was that early centralized societies (chiefdoms and archaic states) were hugely unequal. As I say in Ultrasociety, alpha males set themselves up as god-kings.

Human sacrifice was perhaps instrumental for the god-kings and the nobles in keeping the lower orders down, as Watts et al. (and social control hypothesis) argue. But I disagree with them that it was functional in making early centralized societies more stable and durable. In fact, any inequality is corrosive of cooperation, and its extreme forms doubly so. Lack of cooperation between the rulers and ruled made early archaic states highly unstable, and liable to collapse as a result of internal rebellion or conquest by external enemies. Thus, according to this “God-Kings hypothesis,” HS was a dysfunctional side-effect of the early phases of the evolution of hierarchical societies. As warfare continued to push societies to ever larger sizes, extreme forms of structural inequality became an ever greater liability and were selected out. Simply put, societies that evolved less inegalitarian social norms and institutions won over and replaced archaic despotisms.

We now come to my second critique of the Watts et al. paper. I actually agree that Austronesia is a good laboratory for testing many (but not all) theories of social evolution. There is of course a serious deficiency in the dataset that Watts et al use: it’s static. The basis for their data are observations made in the “ethnographic present.” If you want to assign causality, however, you need to get at the dynamics—how things change with time (as causes typically precede effects, the ability to resolve socio-cultural trajectories in time is critical). Russell Gray’s group (AKA Watts et al) has come with a clever way to get around this problem by using linguistic trees. Some cultural evolutionists, like Joe Henrich, are quite critical of this approach. But even if it works, there is a much more important flaw in the Austronesian database.

The most complex society in their sample is Hawaii, which is not complex at all when looked in the global context. I am, right now, analyzing the Seshat Databank for social complexity (finally, we have the data! I will be reporting on our progress soon, and manuscripts are being prepared for publication). And Hawaii is way down on the scale of social complexity. Just to give one measure (out of >50 that I am analyzing), polity population. The social scale of Hawaiian chiefdoms measures in the 10,000s of population, at most 100,000 (and that achieved after the arrival of the Europeans). In Afroeurasia (the Old World), you don’t count as a megaempire unless you have tens of millions of subjects—that’s three orders of magnitude larger than Hawaii!

Why is this important? Because it is only by tracing the trajectories of societies that go beyond the social scale seen in Austronesia that we can test the social control hypothesis against the God-Kings theory. If HS helps to stabilize hierarchical societies, it should do so for societies of thousands, tens of thousands, hundreds of thousands, millions, tens of millions, and so on. So we should see it persist as societies grow in size.

If HS is destabilizing, then once societies become too large, HS would be selected out. HS is a liability at any size, but the larger a society becomes, the harder it is to hold it together. In this sense HS is a greater liability for megaempires than for chiefdoms. Moreover, if you live on a huge continental mass (and not in an isolated archipelago), once somebody figures out how to make hierarchical societies less unequal (and more cooperative), these people will conquer their more despotic neighbors, spreading egalitarian institutions—eventually—through the whole Afroeurasia.

Note that equality here is very relative—post-Axial megaempires (read Ultrasociety on the importance of the Axial Age) also had kings and nobles, and were quite unequal by today’s standards. But they were better than the archaic states. As time went on, they gradually accumulated various egalitarian institutions. After a few thousands of years this process resulted in pretty decent modern societies in which most of us live today. Even the worst ones, like North Korea, don’t practice human sacrifice. Cultural evolution is faster than genetic evolution, but it still needs time to cumulate useful, functional traits, such as the norms and institutions that promote equality, and therefore cooperation.

So we need to go outside the Austronesian material to test the predictions of the social control hypothesis versus the God-Kings hypothesis. This is what we are doing in the Seshat project, and I estimate that we will complete data collection on extreme forms of inequality by the end of summer or early Fall. So stay tuned.

But as a preview (which will not come as a surprise for those of you who read a lot of world history), preliminary results suggest that HS is very common (if not ubiquitous) at a certain stage of social development—and then it invariably fades away. HS must impose a pretty hefty price on social durability and ability to resist external enemies to generate such a clear-cut macrohistorical pattern.

Also, our preliminary results in the Seshat Databank indicate that there are many other kinds of human sacrifice than the one Watts et al. discuss, which targeted people at the low end of the social hierarchy. In some societies, it is aliens, such as captured warriors, are sacrificed. In others we see sacrifice of high-status individuals, such as children of the elites, or their military followers. Things are much more complex—an interesting!—than one might conclude on reading their paper.

A final thought, hearkening back to another paper Watts et al published last year, in which they argued that moralizing High Gods are not necessary for the evolution of political complexity. Same problem. Perhaps High Gods were not needed for complex chiefdoms in Hawaii and Samoa, but the jury is still out on whether megaempires cold survive without them. Again, stay tuned!