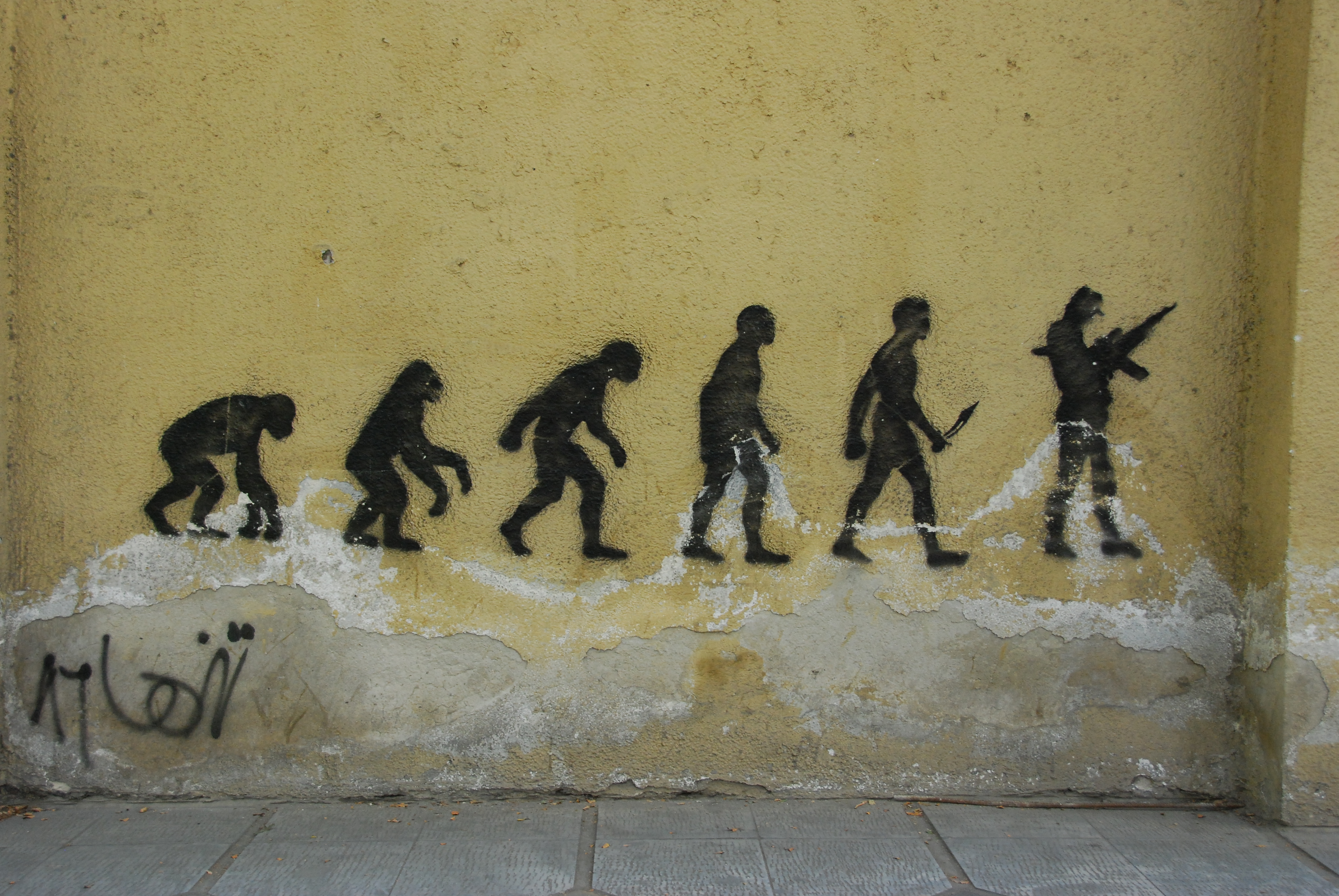 In Defense of the Blank Slate

War is not the necessary outcome of evolution. Image by Paul Keller, via Wikimedia.

I couldn’t resist tweeting a reply to Michael, who I count as a respected colleague and friend: “I have to ask: how does an ancient massacre bear upon any of the assumptions of ‘blank slate’ psychology?”

There ensued an eruption of tweets that came and went, like so many other disturbances of the Twitterverse.  The matters at stake are anything but ephemeral, however, and bear upon the very nature of human psychology and culture from an evolutionary perspective. A blog post doesn’t provide much more opportunity for serious thought than a tweet, but I’ll try to say just enough to map out the intellectual territory and link to the deep end of the pool (the academic literature).

Michael responded to my reply with this tweet: “Blank slate assumption: war is a modern invention w/no relation to our evolutionary propensity to aggression”. To my mind, that’s like mixing apples and oranges. How far warfare extends back in human history is one matter. The open-ended flexibility of the human mind is another. I don’t care how much they have been conflated in the past. If we’re interested in our capacity to behave in almost any fashion, then an ancient massacre tells us nothing. Zero. Zip.

So let’s get back to the central question of the human capacity to behave any which way.  But first let me tell you about two other blank slates.

The blank slate of natural selection.

As nearly everyone knows, natural selection requires three ingredients: variation, selection, and heredity. When these ingredients are met, then traits evolve that adapt organisms to their environments.  It is common for evolutionists to assume that all traits are heritable, in which case organisms are blank slates that selection can write anything upon. This is often called “adaptationist thinking” or “natural selection thinking” and it is arguably the most powerful tool in the evolutionary toolkit.

Even though evolutionists indulge in their own brand of blank slate thinking all the time, they do not defend it as literally correct. They know that not all traits are heritable, that phenotypic variation is constrained by developmental pathways, and all that. Thus, they easily back away from their blank slate assumption, but they still legitimately defend it as a valuable heuristic that is true much of the time.

The blank slate of the vertebrate immune system.

Immunologists distinguish between the “innate” and “adaptive” components of the immune system. The terms are a little confusing, because the “innate” component is a mind-bogglingly complex set of adaptations that evolved by natural selection to protect us from the onslaught of disease organisms. What makes them innate is that they are automated and don’t change during the lifetime of the organism. This is sometimes called “closed phenotypic plasticity” in the evolutionary literature.

Are immunologists justified in employing a blank slate assumption concerning what can evolve by the adaptive component of the immune system? Yes, in exactly the same sense as evolutionists employ adaptationist thinking for the study of genetic evolution.

The blank slate of human psychology.

Now let me ask you to think of the human capacity for behavioral and cultural change as like the vertebrate immune system. There is both an innate and adaptive component, which result in forms of closed and open behavioral phenotypic plasticity respectively. The adaptive component of human behavioral and cultural flexibility justifies the same kind of blank slate adaptationist thinking employed by evolutionists (based on heritable genetic variation) and immunologists (based on the variation and selection of antibodies). It’s that simple.

B.F. Skinner, the psychologist associated with the “blank slate” tradition more than any other, wrote this abstract for his 1981 article in Science magazine titled “Selection by Consequences”:

Selection by consequences is a causal mode found only in living things, or in machines made by living things. It was first recognized in natural selection, but it also accounts for the shaping and maintenance of the behavior of the individual and the evolution of cultures. In all three of these fields, it replaces explanations based on the causal modes of classical mechanics. The replacement is strongly resisted. Natural selection has now made its case, but similar delays in recognizing the role of selection in the other fields could deprive us of valuable help in solving the problems which confront us.

Skinner got one thing right and another thing wrong in this passage. He was right that human behavioral and cultural flexibility has an open-ended component similar to the adaptive component of the vertebrate immune system, which justifies the same kind of adaptationist blank slate thinking employed by evolutionists and immunologists. He was wrong that this kind of thinking replaces “explanations based on the causal modes of classical mechanics”. In evolutionary parlance, this is like saying that thinking in terms of ultimate causation replaces thinking in terms of proximate causation. Skinner’s reluctance to open the black box of proximate mechanisms led to the demise of the tradition of behaviorism in academic psychology—although it remains alive and well in branches of applied psychology, where the goal is to actually accomplish behavioral and cultural change. Every evolutionist worth his or her salt knows that a fully rounded evolutionary approach requires attention to both proximate and ultimate causation, or “function”, “phylogeny”, “mechanism” and “development”, to use Niko Tinbergen’s useful fourfold distinction.

I am reaching the limits of a blog post, but the bottom line is that “blank slate” adaptationist thinking is as essential for the study of human psychology and culture as it is for the study of genetic evolution and immunology. The polarizing distinction between “Evolutionary Psychology” and the “Standard Social Science Model” was a wrong turn from which we all need to recover.

If you have enjoyed dipping your toe into this subject, then I invite you to dive into the deep end of the pool with this 2014 article published in Behavioral and Brain Sciences titled “Evolving the Future: Toward a Science of Intentional Change”.  My co-authors, Steven C. Hayes, Anthony Biglan, and Dennis Embry, are accomplished applied behavioral scientists who come from the Skinnerian tradition and are experienced at accomplishing positive open-ended behavioral change. BBS is a commentary journal, which means that our target article is followed by approximately two-dozen commentaries from our academic colleagues and our reply, giving a sense of the spectrum of current scientific opinion that is out there. In the future, I hope that my friend Michael Shermer and other skeptics about the blank slate concept will base their blog posts and tweets on what is taking place at the deep end of the pool, rather than massacres that took place in the distant past.