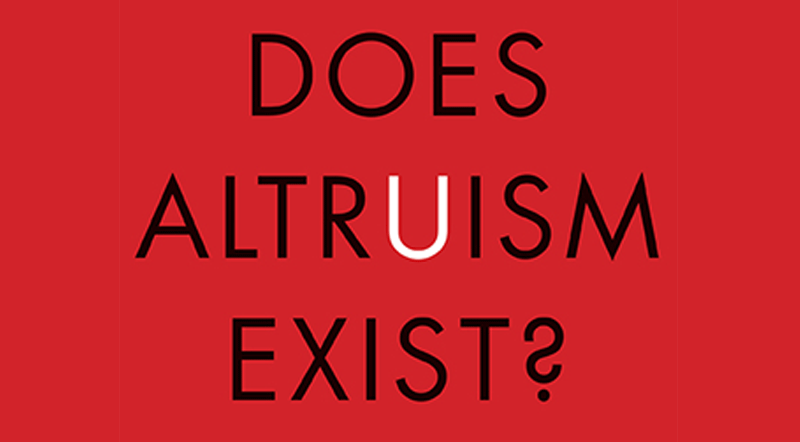 Does Altruism Exist? A Short Introduction to a New Synthesis

I am pleased to announce my newest book, Does Altruism Exist? Culture, Genes and the Welfare of Others, which is published by Yale University Press in collaboration with the Templeton Press as the first in a series of short books on foundational questions in science.

I welcomed the opportunity to write a short book (149 pages) on the foundational question of altruism, which has been pondered throughout the ages and has been a central question in evolutionary theory since Darwin. A short and accessible introduction is needed because I think it is legitimate to say that a new synthesis is at hand.

Other moments in the history of evolutionary thought that claimed the title “synthesis” include the modern synthesis in the 1940’s and the study of social behavior from a unified evolutionary perspective, which E.O. Wilson covered in his 1975 book Sociobiology: The New Synthesis. A 2010 edited volume titled Evolution—the Extended Synthesis, based on a widely publicized workshop that I was fortunate to attend, led to a lively debate over whether even the modest claim “extended synthesis” was warranted. What gives me the chutzpah to claim that a new synthesis is at hand for the topic of altruism?

One reason is because the issues surrounding multilevel selection, after over a half-century of debate, have at last been largely resolved. This does not mean that multilevel selection theory is right and other theoretical frameworks such as inclusive fitness theory are wrong. It means that all of the major frameworks offer different perspectives on a single set of causal processes regarding evolution in multi-group populations. The concept of equivalence is part of the new synthesis and is accorded a chapter in Does Altruism Exist? The resolution of the multilevel selection controversy enables me to describe how altruism evolves in a way that makes one wonder in retrospect what all the fuss was about.

Third, the study of evolution in relation to human behavior and culture has come of age. This is important because altruism is inextricably linked to the functional organization of groups, which is central to all branches of the human social sciences. When E.O. Wilson published Sociobiology in 1975, his final speculative chapter on humans caused an uproar. Today, nobody blinks when an article on a human-related subject from an evolutionary perspective appears in Science, Nature, the Proceedings of the National Academy of Sciences, or the many dozens of specialized academic journals. The scientists engaged in this pursuit number in the hundreds and thousands, although this is still a tiny fraction of the worldwide academic community. A new synthesis has arrived–and many more people need to know about it.

Fourth, the study of altruism is not just an academic pursuit. It is needed to improve the quality of life at all scales, from the development of a single child to the global economy and environment. The statement “nothing about public policy makes sense except in the light of evolution” (to paraphrase Theodosius Dobzhansky’s famous dictum about biology) would mystify most politicians and public policy experts, but it is firmly part of the new synthesis and the raison d’etre of the Evolution Institute.

Here is how I describe the new synthesis toward the end of Does Altruism Exist?.

Most of the ideas that I have reported in this book are recent, especially when compared to the history of thinking on altruism. The concept of major evolutionary transitions, which merges the concepts of organism and society, wasn’t proposed until the 1970’s. Multilevel selection’s road to reacceptance was so long that this is one of the first books to offer a post-resolution account. The use of evolution to justify social inequality and ruthless competition stigmatized the study of evolution in relation to human affairs for decades following World War II. A renewed effort didn’t gather steam until late in the 20th century. The first book-length treatments of religion from an evolutionary perspective didn’t appear until the start of the 21st century. Rethinking economics and public policy from an evolutionary perspective is more recent still. For the vast majority of politicians and policymakers today, evolution is a word to be avoided. If it stands for anything, it is the cruel policies that became associated with the term Social Darwinism in the first half of the 20th century.

That qualifies as a new synthesis in my book, which I describe as concisely as possible for a broad audience. If I have done my job well, then the reader will understand why evolutionary theory is essential for accomplishing the altruistic goal of making the world a better place.