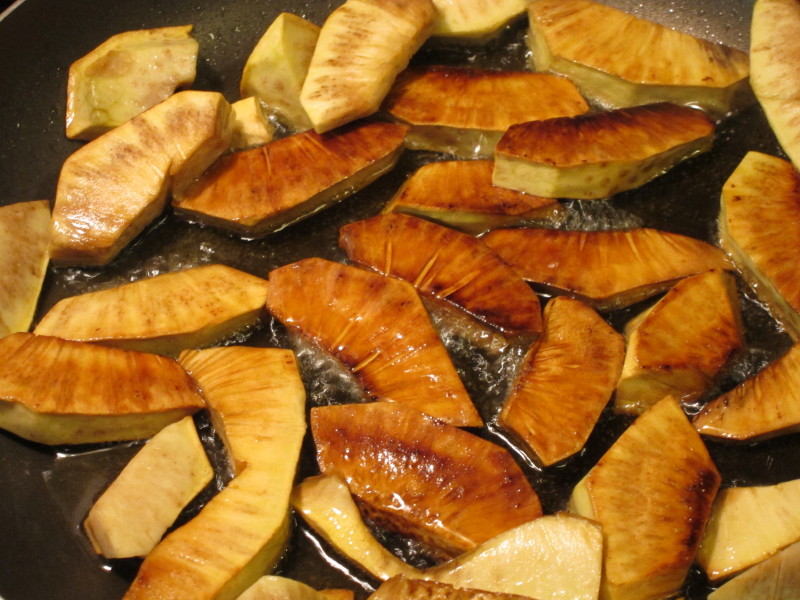 As I was growing up in boreal Russia, I remember reading many children books about travel and adventures in exotic countries. One book was about a tropical island where bread grew on trees… it all sounded like a fairy tale.

But later I learned it was true! There is a real plant that is called breadfruit tree.

Ever since I switched to paleo diet a year ago, I have been dreaming of tasting breadfruit. It sounds like a perfect substitute for bread because it is a real fruit, whereas bread is made from grass seeds. Evolutionary reasoning suggests that plants, who don’t want their seeds to be eaten, should protect them as best as they can – for example, by loading them up with poisons. And that is what grasses do (read about lectins on Paleo Mom’s blog).

Fruits, on the other hand, are something that plants want us to eat (typically, seeds are ingested with the fruit, but not digested, and when they are defecated out, the plant gets to disperse and a little bonus in the form of natural fertilizer, to boot). Breadfruit trees, thus, should be putting all kinds of wholesome and yummy nutrients in their fruits. And they do.

Yesterday, finally, my dream has come true. The Indian food store, patronized by my daughter-in-law got a shipment of breadfruits, and we have acquired one. I checked the Web for recipes, and it turns out breadfruit can be cooked in a variety of ways. I decided to follow the basic recipe of Helene Dsouza, except I omitted all spice apart from salt and a dash of vinegar, because I wanted to find out what the breadfruit itself tastes like. So, I started with the fruit:

peeled and quartered it

removed the core, cut it into chips, and soaked/marinated it in salted, vinegary water for about 30 minutes

and, finally, fried them in olive oil

As a result of my inexperience the chips are a bit too well done, so next time I will finish cooking as soon as they get to the golden brown stage.

I tasted the result with some trepidation. Over the last year I have tried a variety of tuber and root vegetables (cassava, taro, jicama), but I don’t see making any of them a staple (so I stick with potato, while occasionaly eating yams, carrots, and parsnips for variety). All of those exotic tubers had tastes that I found slightly unpleasant (if I grew up eating them I would probably feel otherwise, but I come from a potato-eating culture).

My experience with breadfruit was very different. It tastes great! It is like potato in that it is bland enough to serve as a base for a meal, when combined with a variety of other ingredients and spices. But it also has a distinctive and pleasant taste, so it is a true alternative to potato. If I only can find a reliable supply around here, I am going to make it a staple.

Now that I have tasted breadfruit, I find it highly ironic that the humanity consumes so much wheat bread, while eating so little breadfruit. How did we end up making poisonous grass seeds our most important food source, when we have so many alternative, much more healthful foods to choose from?!

Even more poignantly, why do pacific islanders eat bread, rather than breadfruit? In the next blog I will discuss such broader implications.

All fotographs in this blog ©Peter Turchin