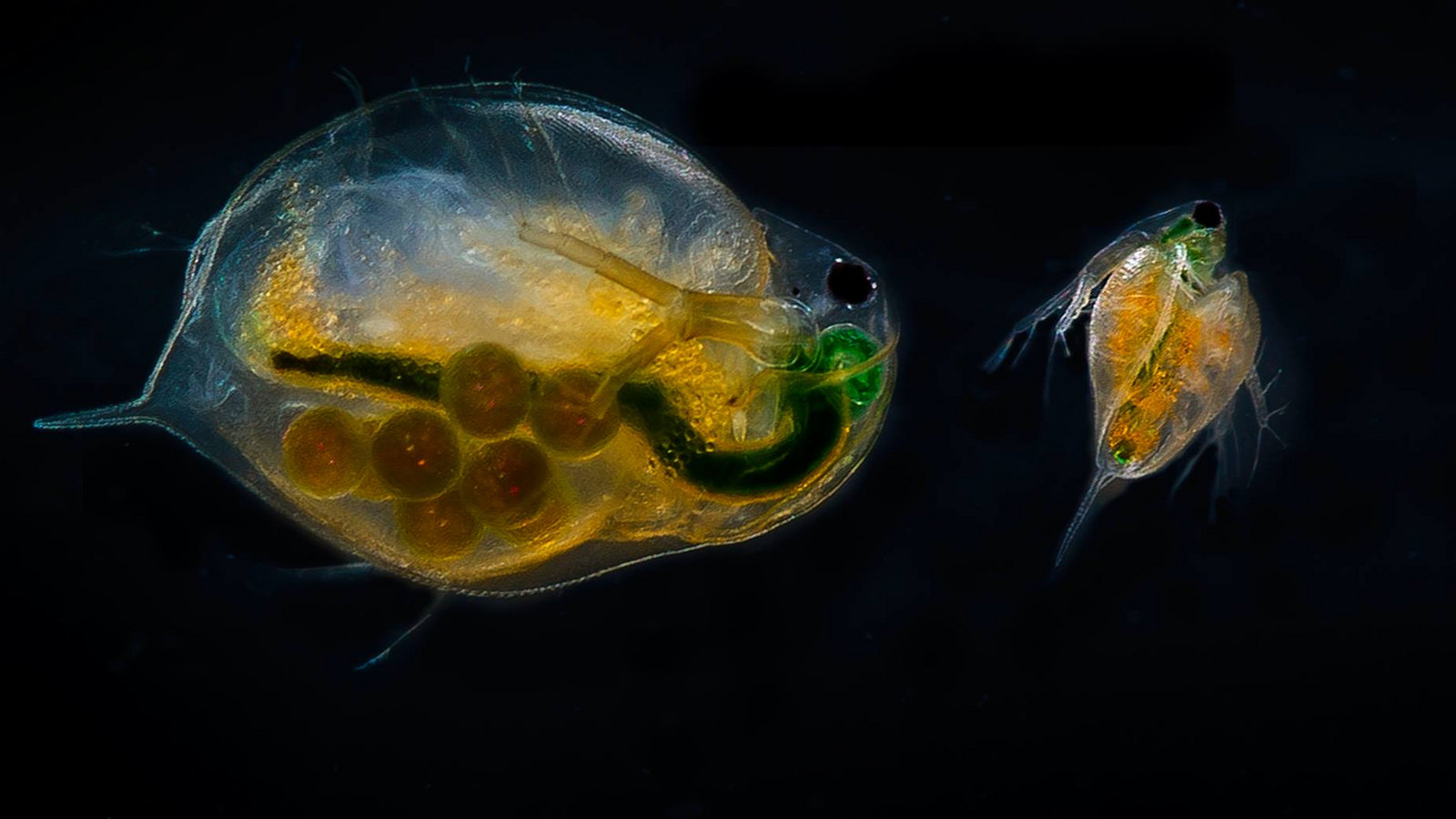 A Few Months of Evolutionary Change Reshapes a Whole Community

By Jeremy YoderNovember 4, 2015 4 Comments
Daphnia magna, adult and juvenile. From NTNU Faculty of Natural Sciences and Technology, via Flickr.

If there’s one thing everyone knows about evolution, it’s that it’s supposed to happen slowly, over many generations. But “many generations” for one organism is barely the blink of an eye for another — and, for the vast majority of life on earth, a human generation is actually quite a long time. Evolution in response to natural selection over a few weeks or months may not seem like it could matter much, but a recent experiment with one tiny evolutionary champion shows that it can, in fact, have measurable effects on a whole community of interacting species.

The communities in question are the kinds found in ponds all over the world, in which swarms of small crustaceans compete to graze and prey on algae and other microorganisms, and evade death in the gaping maws of minnows and sticklebacks. One of these crustaceans is Daphnia magna, the common water flea, which has a life cycle that turns out to be quite convenient for scientists who want to watch evolutionary change in real time.

For most of its life cycle, D. magna is an all-female species, and each Daphnia can reproduce by parthenogenesis, producing clutches of fully fertile eggs that are each a genetic clone of their mother, and which are ready to produce eggs of their own after two to three weeks of growth. This rapid mode of reproduction works well for many conditions, but when the pond becomes crowded or food gets scarce or the days grow short and cold, D. magna lays eggs that develop not into more parthenogenetic daughters, but into sons, and daughters that will let a mate fertilize their eggs. Eggs produced by sexual reproduction develop into a dormant state, and can remain in the sediment of a pond for years. When they hatch, they’ll restart the parthenogenetic lifestyle.

That life cycle came in handy for Jelena H. Pantel, Cathy Duvivier and Luc De Meester, ecologists at the University of Leuven in Belgium who were interested in the ways in which evolutionary change could alter a broader ecological community. They sampled Daphnia eggs from the bottom of a local pond, and hatched a subset of them, then used the hatched Daphnia to establish clonally-reproducing populations. In early summer, they introduced the clonal Daphnia into 200-liter tanks inoculated with food algae and a community of other small aquatic crustaceans. Some tanks also had artificial plants, and some tanks had predatory fish — both simple ecological factors that can determine which members of the experimental community thrive.

After about ten Daphnia generations — a bit more than three months — the team sampled Daphnia from each tank, and used them to establish clonal populations growing in constant conditions in the laboratory, without selection from competitors or predators. The next summer, they set up the tanks again — but this time, in addition to the plants/no plants and fish/no fish treatments, each tank either received Daphnia from the clonal lineages that had previously evolved in conditions like those in each tank, or freshly hatched from eggs in the original sample, which had been in storage the whole time.

After just a month, the authors sampled the crustacean communities in the tanks, and found that Daphnia from the evolved populations had grown to higher population density in each artificial environment. This was reflected in the rest of the crustacean community — some species became more common when living with evolved Daphnia, and some less common, but the net effect was that communities in all treatments with evolved Daphnia were more diverse. The effect of evolutionary change in the Daphnia was similar in scale to the effect of the presence or absence of artificial plants or the presence or absence of fish, the only other major differences among the tank environments.

Notably, it’s not clear how the Daphnia evolved to become better adapted to each artificial environment; we only know that it happened because evolved Daphnia populations grew more rapidly than populations freshly established from eggs. The results also doen’t account for the possibility of evolutionary changes in all those other species in the tanks with Daphnia. They wouldn’t have had time for much change in the second experiment, but given longer exposure to the artificial environments, they probably would have adapted as handily as the Daphnia.

Still, this is a nice example of the potential consequences of evolutionary changes of a sort that likely happen every summer, in every pond or puddle big enough to house some water fleas. It joins other known cases of rapid evolution, like the human immunodeficiency virus adapting as it establishes infection, or rapid, seasonal changes in the genetic makeup of fruit fly populations. We’ve also seen cases where adaptive change in one species can alter the rest of the communities they inhabit — like an experiment similar to this one with Daphnia, showing community-wide effects of different locally-adapted forms of stickleback fish. Pantel et al., though, have linked rapid adaptation directly to ecological consequences.

The overall lesson is that evolutionary change is constant, and that evolving populations can change the very environments to which they’re adapting. Natural selection isn’t shaping species to achieve some single ideal version of themselves, but in pursuit of constantly moving targets — and that’s worth keeping in mind no matter we’re talking about Daphnia magna or Homo sapiens. 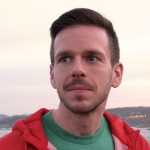